The Mac Pro “Quad Core”Â (specs here) that I picked upÂ at a surplus sale for $50 just cost me another $15. No, wait, it was $20. The power button was blinking on and off and the machine wouldn’t boot. Supposedly, you can fix certain things just by resetting the SMC.Â Or maybe the battery is dead. Since the computer is about 10+ years old and probably was still using the OEM battery, I figured I should start there, I started there byÂ replacing it. (It’s a C2032 lithium battery, which is apparently the button battery equivalent of a AA. It cost me $5, because I didn’t Â check Amazon, where theyÂ runÂ about 80Â¢.)

But, sorry, no luck with the SMC or battery. That left “badÂ RAM” as the problem. The RAM is (unfortunately) but exotic and obsolete:Â PC6400 DDR2 ECC 800MHz in pairs of 240 Pin FB-DIMM Modules. Â ECC memory! Can you believe it? I don’t think I’ve used ECC RAM since leaving college and the DECSystem-20‘s core memory. Or, who knows? Maybe I use ECC memoryÂ all the time via Facebook, Google, Amazon, and other web-based services. But I’ve never had to pay for it. It’s not cheap, at upwards ofÂ $10 per GB from OWC.

How much could I afford? The machine came with 4 MB, but it supports up to 16 GB (or 32 GB if you cheat). It seems crazy to spend money to upgrade a machine today if you’re only going to have 4 GB when you’re done, but who wants to buy $80 worth of RAM?

Finally, I hit on the idea of getting the wrong kind of RAM. Apple RAM has about 4 ounces of head-spreaders per stick. (It’s actually pretty amazing. I guess they figure people who buy a Mac Pro are going to be serious users.) But you can get ECC RAM of the wrong kind directly from China for just $15. So that’s what I did.

It arrived, and I installed it. (What an awesome thing it is to have a computer from Apple that is easy to upgrade instead of a hermetically sealed Batmobile.)

The best part is thatÂ it works. It’s probably more failure prone now, I know. But remember, it wasn’t booting at all. This looks better to me: 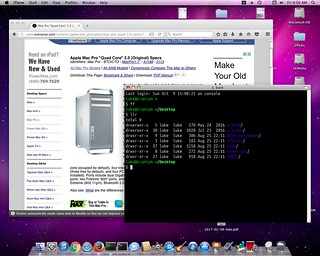