I got this message when I was rebuilding my father-in-law’s 2007 iMac. It happened at one point when I was trying to install on OS on the boot drive.

This might be the most realistic time-to-complete estimate I’ve ever seen in an Apple installer:

(I haven’t talked about that computer. I got it a couple of years ago and I’ve been meaning to upgrade it, just like I did with our own 2007 iMac. The only difference from that upgrade plan was I only used a 1 TB drive for the boot drive. The use case is to back up some computers at work, so I added a 4 TB external drive. I would have prefered making it internal, so I could use the SATA connection rather than a USB 2.0 external drive. But … sigh. Apple. There isn’t really room for another drive (yes, I know about replacing the Superdrive with in internal drive) but beyond that, getting at the drive, in case it fails and needs replacing is so incredibly hard, that I decided I could live with slow backups.)

I picked up a gorgeous 27″ iMac at the last UAA Surplus sale. But the fans run. A lot. I think someone put a new hard drive in it without considering how Apple makes everything as hard as it can possibly be.

Here’s some details on the problem. Apple has its own way of sensing the temperature on the hard drive. Because of course they do. And unless you get an Apple branded hard drive, or want to short the pins on Apple’s HD cable, you have to get a thermal sensor cable from OWC. It only costs $40, plus another $10 to ship to Alaska. (Or you could check first, like I should have, and find out it’s cheaper on Amazon, and you get free Prime shipping too. Sigh.)

Sigh. But! If get it working properly again … I’m telling you, this machine is gorgeous:

Thirty years ago I used to know how to use mount and /etc/fstab and things like that to mount disk drives. But nowdays, it’s all too hard to remember. Especially now that we use UUIDs.

So here are some things to remember:

$ sudo e2label /dev/sdb1 # to see what I called the device

Mostly I’ve been blogging about my adventures in Linux-land. But I wanted to write a bit about my other project.Â About 9 1/2 years ago, we got an iMac, and about four years ago we replaced it with a Mac Mini.

But that wasn’t why we upgraded. It was because the iMac was barely working. The hard drive would go “tick tick tick” for the first hour or two whenever you started running it. The SuperDrive had quit working a couple of years earlier. (Technically, a DVD got stuck in it andÂ could not be removed.) Plus the usual “I’m an old Mac so sometimes I just take forever to do things” that we’re all used to. We finally upgraded because we couldn’t trust that it would work any more.

So. Fast forward four years. I got tired of tripping over the iMac, but I couldn’t bear the thought of losing such a pretty computer. So …I fixed it. Or maybe IÂ threw good money after bad and wasted my time fixing a ten-year old computer. Or both. 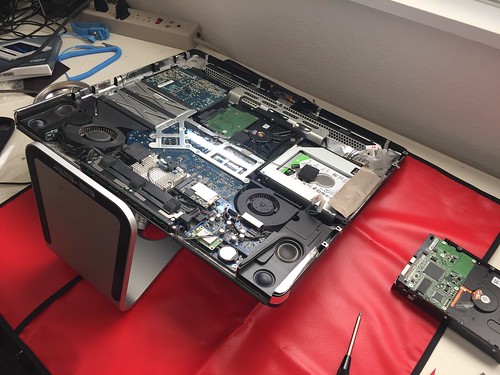 I will say that Apple sure doesn’t want you to make a bootable OS install disk. In spite ofÂ all the instructions they provide (here, here, and here). I own three Macs, but ((Shift+) Option+) Command+R doesn’t work on any of them. I finally dug up an old Snow Leopard install DVD and then upgraded to El Cap the slow and painful way.