I still use iTunes sync my iPhone periodically to my computer (mainly so I can retrieve photos off the phone). Every time I do, I get to watch this:

It copies several hundred unchanged songs back onto my phone. This is apparently a bug. A known bug, known for years, that Apple just won’t fix because it’s Apple being Apple. Screw them.

(This bug is perhaps unrelated to a separate problem â€” honestly, a bug â€” wherein someone decided it would be a good idea to change the file’s “modification” time every time a song was played. This is an idea so stupid I simply cannot imagine how anyone thought it was clever.)

A year ago, I wouldn’t have guessed that they could make iTunes worse. But they did. They took out useful things (like managing the apps with a mouse rather than a fingertip, and managing the order of screens). To be sure, it was always a crappy interface, more interested in showing you pictures than giving you useful data, or, better yet, a grid-based sortable interface. But that’s iTunes for you. Now it’s worse.

Obviously, there’s nobody at Apple who has more than a dozen apps on their phone. Or more likely, they’ve got some secret tool that the general public can’t use.

Oh, but they did tart up the app store (both the Mac and iOS versions) so you have to wade through commercials every time you use it. Want to find how monumentally huge that iMovie update you don’t want will be? It used to be on the first screen, but now it’s helpfully like four screens deep.

Thank you so much, Apple. You SUCK. But you knew that.

The biggest single reason I wanted to fix my old iMac was to put a honkin’ big HD in it, and the reason for that was so I could have an iTunes library on the main hard drive instead of an external (USB 2.0) drive. My iTunes Media folder looks like this:

Why iTunes doesn’t let us manage our storage intelligently is a mystery (especially given the ridiculously small storage options that Apple providesÂ its Macs, and all their other devices for that matter). But now I’ve got plenty of room to store 250 GB of media in the iTunes folder as well as the different places I keep it for real. So there.

The only problem was getting it into the iTunes folder, in a way that iTunes understands. But this is a known problem, and Apple has a documented procedure.

Then I had to Authorize my computer (the “new” iMac) and Deauthorize the old one (the Mac Mini). I don’t know how Apple keeps track of what computers have been authorized, but they decided this one was already Authorized, from back when it was our main computer. I don’t know if I forgot to Deauthorize it or what, but now I’ve only got 2 of 5 Authorized computers.

I’ve got a podcast and it’s a chore to update. I’ve built some tools to help me produce an RSS feed for the podcast, which is a good thing, since RSS = XML = too persnickety to do by hand. But I’ve had to do some of the work by hand, specifically, tagging the .MP3 files with the appropriate ID3 tags. I was using iTunes, which has never been very fun, and seems to get worse with each iteration.

Enter eyeD3. It’s a tag editor, but unlike most of them, you can operate it from the command line. Better yet, eyeD3 understands ID3 v. 2.X tags. The documentation for the classic eyeD3 interface is what I like best. You can use it to set all kinds of tags for your podcast. Like these v2.x tags here. If you want to set one of the date tags, you’ll need to know how to specify a date in ISO 8601 format.

Also, did you know that mp3info lets you get the length of an audio file from the command line? I didn’t, until I read it on the internet, and durned if it’s not true. That’s pretty nifty. And there’s even a Ruby API for it!

I also learned about something called mutagen, which is like eyed3 but for arbitrary types of audio files.

I spent the day learning all this, so my tools still need to be updated to do what I now know can be done programmatically. But I’ve done the hardest part, viz.: 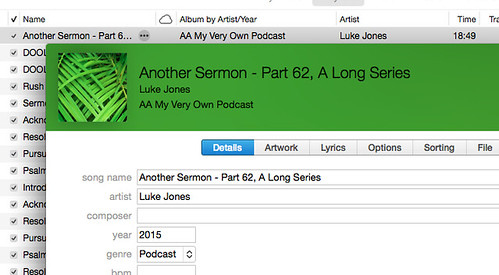 Apple has never impressed me with their ability to have two different devices synchronize with each other. But they’ve got plenty of hubris, so they keep trying. Take the app store. (Please!) Here’s what happens when I sync my iPad: it tells me I need to authorize my computer to sync to it, I authorize it, and then it tells me never mind, because the computer is already authorized.

OK. That explains it, then.

Looking at iTunes, I see my top song this year was “40 Day Dream” by Edward Sharpe and the Magnetic Zeroes. I listened to it 137 times. A few of those must have been in 2010, since I bought it that October, but there’s no question it was one of my favorites this year. (Sadly, there’s no way with an iTunes Smart List to learn what a song’s play count was during a certain period of time.)

(Note that “40 Day Dream” is on the same (eponymous) album as “Home”, a song covered by Jorge & Alexa Narvaez in their charming YouTube viral video.)

Following “40 Day Dream” in my most-played list were “Bye Bye Bye” by Plants and Animals, “Buildings and Mountains” by the Republic Tigers, and “Can You Tell” by Ra Ra Riot, with 116, 111, and 106 plays, respectively.

As it happens, all those are digital downloads from Amazon. I have a handful of songs from the iTunes store, but only a few, since a web browser offers a much better shopping experience than iTunes does. Web browsers have offered tabs since, when, 1997 or so? But iTunes is pure-linear, and shopping on it interferes with other things you might be trying to do with iTunes.

If we subtract out all the digital downloads, leaving just songs that I’ve ripped from actual physical brick-and-mortar CDs, my top songs from 2011 were: “If You Leave” by Orchestral Manoeuvres in the Dark, “He’s a Pirate” by Klaus Badelt and Hans Zimmer, “Mr. Roboto” by Styx, and “Africa” by Toto. (Don’t wince at my taste: serious musicians love that song! See track 11 here.)

The pirate song is from my collection of Film Music of course. The others are, like those I mentioned previously, from a playlist of music that has appeared on the TV show Chuck. If we subtract out “Chuck” music and “Film Music” then my top songs in 2011 were: “YYZ” by Rush, “A Raft of Penguins” by Ian Anderson, “La Villa Strangiato” by Rush, and “There is a Green Hill” by the World Wide Message Tribe. Also in the Top 10 list are the Genevan Psalter’s Psalm 124 by Calvin College, “Peace of Mind” by Boston, and “Just Showed Up (for My Own Life)” by Sara Groves.

I mentioned recently how handy it can be to create complex “Smart Playlists” in iTunes. Suppose you want to make a smart play list like this one:

It says the songs in this new playlist have to be “My Non Dogs.” (My Non-dogs is another playlist that includes songs that are either unrated or rated 3 stars or above.) But besides not being dogs, this playlist’s songs also need to be performed either by David Byrne or by the Talking Heads. In other words, iTunes gives us a friendly way to construct a query using boolean algebra.

Prior to iTunes 10.4, that was easy enough. There were little buttons at the end of the pane. A ‘-‘ button deletes the rule; a ‘+’ button adds a new rule; a ‘…’ button makes a rule with multiple conditions, as above:

Smart playlists can still use boolean algebra: all my old lists still work. The only problem is trying to make a new one. How do you push a button that’s not there?

The answer is to hold down the option key. Then the ‘+’ buttons become ‘…’ buttons:

I should point out that taking a screenshot is a lot more difficult when you’re holding the option key. The only way I could figure out to do it was by doing a “Timed Screen Grab” using the Grab utility: